One evening, just after I had turned 30, I was sitting around with friends contemplating the future and what I wanted to accomplish before I left this earth. That contemplation inspired me to write down all the things I wanted to do, which eventually turned into a long list of 100 life goals.

Before you scroll down to my list, a few important things:

1. Don't just read my list. Write down your own life goals list. Doing so will provide you with clarity and direction. 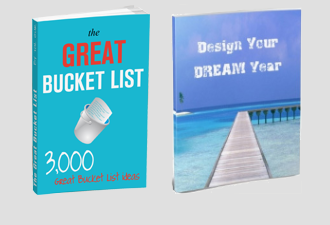 2. Furthermore, I suggest creating an action plan while motivation is high. For that reason I created a free guide, Design Your Dream year, containing my 4-step goal-setting process for attaining big dreams. (The exact process that allowed me to check off all my goals on my list)

Click below to get both guides, Design Your Dream Year and The Great Bucket List - 3000 bucket ideas to do before you die, for Free.

Get the Guides for Free 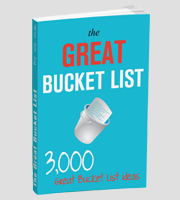 Click here to get my FREE eBook, The Great Bucket List – 3000 ideas to do before you die + my Design Your Dream Year workbook which contains a proven step-by-step action plan to help you check off each of those big goals on your list. Remember to download my FREE ebook, Design Your Dream Year, It’ll help you have to set and achieve your own life goals list. And, if you feel like you could use some extra support, check out my coaching program. If you qualify, I could be with you every step of the way.

Design Your Dream Year
Get my 4-step goal-setting process for attaining big dreams. Just enter your email below and it will be sent to you instantly for free.