I recently finished the book Night by Elie Wiesel and it offered some powerful inspiration that I want to share with you today.

Jewish-American author, professor, and political activist Elie Wiesel is the ultimate example of how a person can turn their own struggle into a benefit for the world.

Wiesel survived the Nazi concentration camps to tell his story as a message of peace and dignity on behalf of all humankind. 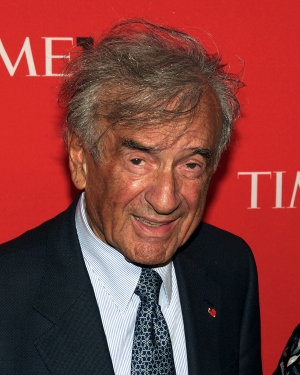 Eliezer Wiesel was born into a traditional Jewish family in Romania on September 30, 1928. He was a teenager when the German army invaded his hometown of Sighet in 1944, imprisoning the entire Jewish community (including Wiesel, his parents, and three sisters) in ghettos.

The Wiesel family was separated when they were deported to Auschwitz, but Elie and his father remained together, dragged from one camp to another while they were worked to the brink of death.

He was reduced to bare existence, to a body to be processed -- no more than the number tattooed on his arm, “A7713.”

He watched his father, already wasting away from dysentery, being brutally beaten until his last breath, not only by the Nazi guards, but also by fellow prisoners who wanted his meager food ration.

Just weeks his father was sent to the crematorium, Wiesel was set free with the remaining Jewish prisoners when the U.S. army liberated the camp in April 1945.

From Silent Victim to Spokesman for Humanity

After the war, Wiesel ended up in France, where he lived in an orphanage for a few years, until he began studying at the Sorbonne in Paris. He entered the field of journalism, writing for French and Israeli newspapers and translating articles into Yiddish, and through his multilingual work, quickly rose in the ranks to become an international correspondent for a Parisian paper.

Even though he was earning a living as a man of letters, Wiesel could not -- would not -- find the words for his experience of the Holocaust. 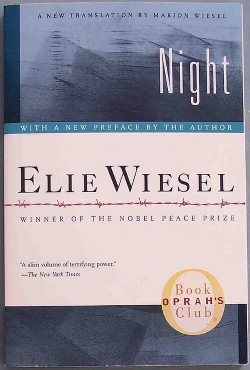 For over ten years, he refused to speak about it, much less write about it: it seemed only silence could capture the unimaginable trauma. But after opening up to his mentors, nobel-prize winning French author François Mauriac and Rabbi Menachem M. Schneerson, he finally came to writing, producing a 900-page memoir in Yiddish.

In hopes of reaching a wider audience, Wiesel rewrote a shorter version of his story, which was later translated into French and then into English as Night. But even with Mauriac’s help, Wiesel struggled to find a publisher for the book, and it only sold relatively few copies...

Wiesel was not discouraged in his commitment to never forget, to never let us forget the dark night in human history: he got his message out through reviews, interviews, and networking among literary authorities.

His perservence in telling and re-telling his testimony paid off over time: Night has sold millions of copies worldwide (appearing in translation in over 30 languages), earning the top spot on the NY Times Bestseller List.

Wiesel turned an unspeakable experience into a life’s work of advocacy, speaking out against the horrors of genocide -- the racism, systemic violence, and degradation of which he was a victim.

He was awarded the Congressional Gold Medal of Achievement in 1985 and the Nobel Peace Prize in 1986 (among other honors) for his interventions in global human rights issues. The Nobel committee called him “the messenger of mankind,” acknowledging his authoritative voice on peace and human dignity.

In addition to his continued political activism, Wiesel chaired the commission responsible for memorializing the Holocaust, authored dozens of books after his best-selling memoir, co-founded (with his wife) his own humanitarian organization, and taught at several U.S. universities, still holding the position of distinguished professor today, at age 86.

From Ultimate Humiliation to Vocation

Wiesel’s success lies in his determination to give meaning to his experience -- not only for himself, but for the sake of human potential.

His story reminds us that no matter how hard life hits us, there are people who have survived the worst that we could imagine -- and worse, beyond what could ever imagine. We are capable of more than we think, and this includes our capacity for creating a better world by learning from our errors, from the lessons of history.

But more than that, what we have to learn from Wiesel’s story is that there is value in every struggle -- it is simply a matter of finding a way to articulate that value; we all carry a message from our darkest night.

"Words can sometimes, in moments of grace, attain the quality of deeds."

"For me, every hour is grace. And I feel gratitude in my heart each time I can meet someone and look at his or her smile."

"When a person doesn't have gratitude, something is missing in his or her humanity. A person can almost be defined by his or her attitude toward gratitude."

"It all happened so fast. The ghetto. The deportation. The sealed cattle car. The fiery altar upon which the history of our people and the future of mankind were meant to be sacrificed."

"Because of indifference, one dies before one actually dies."

"In any society, fanatics who hate don't hate only me - they hate you, too. They hate everybody."

"Most people think that shadows follow, precede or surround beings or objects. The truth is that they also surround words, ideas, desires, deeds, impulses and memories."

"I decided to devote my life to telling the story because I felt that having survived I owe something to the dead. and anyone who does not remember betrays them again."

"I marvel at the resilience of the Jewish people. Their best characteristic is their desire to remember. No other people has such an obsession with memory."

"Our obligation is to give meaning to life and in doing so to overcome the passive, indifferent life."

"No one may speak for the dead, no one may interpret their mutilated dreams and visions."

"There may be times when we are powerless to prevent injustice, but there must never be a time when we fail to protest."

"Friendship marks a life even more deeply than love. Love risks degenerating into obsession, friendship is never anything but sharing."

"The opposite of love is not hate, it's indifference"

"Someone who hates one group will end up hating everyone - and, ultimately, hating himself or herself."

"When a person doesn't have gratitude, something is missing in his or her humanity."

"Peace is our gift to each other."

"There are victories of the soul and spirit. Sometimes, even if you lose, you win."

"Some stories are true that never happened."