In this breakthrough bestseller, Malcolm Gladwell revolutionizes the way we understand the world within. Blink is a book about how we think without thinking, about choices that seem to be made in an instant - in the blink of an eye - that actually aren't as simple as they seem. Why are some people brilliant decision makers, while others are consistently inept? Blink reveals that great decision makers aren't those who process the most information or spend the most time deliberating, but those who have perfected the art of "thin-slicing"--filtering the very few factors that matter from an overwhelming number of variables.

My key Takeaways from “Blink, The Power of Thinking Without Thinking" by Malcolm Gladwell 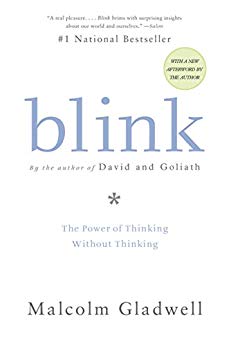 We've all heard that saying, and both followed it and dismissed it but it's true, your intuitive judgments aka your gut feelings, are often superior to your conscious or rational thoughts and feelings, and are much faster too. Snap decisions, where you don't quite know why you thought, said, or did something are to be honored rather than distrusted and if you look closely you'll realize you make more of them than you think, but rationalize them later!

Thoughtfulness is indeed a virtue, just not when it comes to making decisions as the more you think about something, the harder it is to make the 'right' decision as you get lost in too much information that's not important and that makes you miss the key to the answer. However, when we make a split decision, our brain sifts through the important and unimportant information in a flash whilst also picking up on crucial indicators that the rational part of the brain misses.

Most people can recognize if someone is happy, sad, or angry due to their facial expression, the exception being people with autism. In the same way that autistic people cannot read peoples expressions or pick up on their feelings, stress renders non-autistic people temporarily blind in their judgments as they go into tunnel vision mode, only able to focus on 1 thing, 1 threat, and overlook the bigger picture. The only way to fix stress is to slow down.

Prejudice and stereotyping are other issues that hamper our judgment. Racial prejudices are deeply ingrained in people, most of the time without them even realizing it, which influences their thoughts and behavior and affects their judgment. To fix this and strengthen your instinct you must go to new places, meet new people, and experience new things.

There will be times when you've made a snap decision, followed your gut, and it's backfired on you making you wish you'd thought carefully about the situation before diving straight in. So what went wrong? You picked up on misguided information, most often caused by prejudice. By deliberately ignoring certain thoughts and feelings, the information that is not relevant or helpful, we can come to the right decision that's right for us in that moment.

Chapter One - The Theory of Thin Slices: How a Little Bit of Knowledge Goes a Long Way
Chapter Two - The Locked Door: The Secret Life of Snap Decision
Chapter Three - The Warren Harding Error: Why We Fall for Tall, Dark and Handsome Men
Chapter Four - Paul Van Riper's Big Victory: Creating Structure for Spontaneity
Chapter Five - Kenna's Dilemma: The Right - and Wrong - Way to Ask People What They Want
Chapter Six - Listening with Your Eyes: The Lessons of Blink

“The key to good decision making is not knowledge. It is understanding. We are swimming in the former. We are desperately lacking in the latter.”

“We have, as human beings, a storytelling problem. We're a bit too quick to come up with explanations for things we don't really have an explanation for.”

“Insight is not a lightbulb that goes off inside our heads. It is a flickering candle that can easily be snuffed out.”

“In the act of tearing something apart, you lose its meaning.”

“our world requires that decisions be sourced and footnoted, and if we say how we feel, we must also be prepared to elaborate on why we feel that way...We need to respect the fact that it is possible to know without knowing why we know and accept that - sometimes - we're better off that way.”

“We live in a world that assumes that the quality of a decision is directly related to the time and effort that went into making it...We believe that we are always better off gathering as much information as possible and depending as much time as possible in deliberation. We really only trust conscious decision making. But there are moments, particularly in times of stress when haste does not make waste when our snap judgments and first impressions can offer a much better means of making sense of the world. The first task of Blink is to convince you of a simple fact: decisions made very quickly can be every bit as good as decisions made cautiously and deliberately.”

“There can be as much value in the blink of an eye as in months of rational analysis.”

“When we become expert in something, our tastes grow more esoteric and complex.”

“Anyone who has ever scanned the bookshelves of a new girlfriend or boyfriend- or peeked inside his or her medicine cabinet- understands this implicitly; you can learn as much - or more - from one glance at a private space as you can from hours of exposure to a public face.”

“[Research] suggests that what we think of as free will is largely an illusion: much of the time, we are simply operating on automatic pilot, and the way we think and act – and how well we think and act on the spur of the moment – are a lot more susceptible to outside influences than we realize.”

“We learn by example and by direct experience because there are real limits to the adequacy of verbal instruction.”

― Malcolm Gladwell - Blink: The Power of Thinking Without Thinking