A tribute to the introverts among us, Susan Cain’s witty, well researched book tells the story of those who prefer to listen rather than speak. She makes the case that introverts are often overlooked compared to extroverts in the dominant culture. She delves into their psyche and unique strengths so introverts and extroverts alike can better understand this personality type.

My key Takeaways from “Quiet: The Power of Introverts in a World That Can't Stop Talking" by Susan Cain 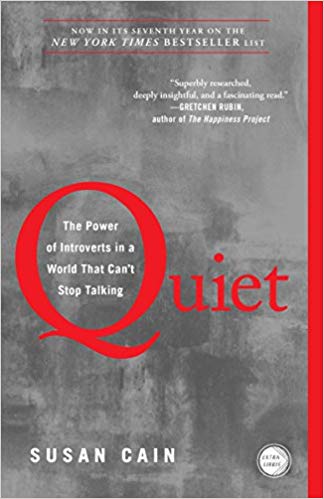 Takeaway #1 What Makes You An Introvert or Extrovert?

Whether we're introverted or extroverted is defined by how the emotional switch in our brain, our almond-sized amygdala, reacts to stimuli - People who are introverts have a stronger response to external stimuli than extroverts.

This was proven in an experiment on infants when cotton swabs were covered in alcohol and held under the infants' noses whilst a recording of balloons being popped was played. 20% of the infants' reacted to the experiment by kicking and screaming, their pulse and blood pressure spiked putting them in the 'highly reactive' category, aka introverted. 40% of the infants' remained cool and calm whilst this stimuli was being presented to them, these 40% being placed in the low-reactive category I.e these infants being the extroverts.

This is why the introverts seek out calm and quiet environments where they can usually have some control over the stimuli whilst the extroverts, who don't respond nearly as much to new impressions, seek out more and more stimulating environments whether they're clubbing or jumping out of a plane.

But just because introverts are sensitive and seek out peaceful environments with limited stimulants, not putting themselves forth to be seen and heard, doesn't mean they're shy. Being shy means you're afraid of being judged negatively, it means you care what people think of you. It's very possible to have shy extroverts as well as shy introverts.

Takeaway #2 Being an Introvert In The Western Working World

It's not easy for introverts to thrive and succeed in the Western world when extroverts are setting the tone, demanding all the attention, and doing all the talking and therefore, often seen as being more cooperative, more interesting, more intelligent and ultimately, more successful.

It's only in the last 150 years in the USA and Europe that extrovertism has prevailed, this due to the 20th century shift that saw more people leaving their close-knit towns and villages for the city. Rural values where it was enough to be honest and hard working were left behind as it became a dog-eat-dog world in order to make it in the city.

In the workplace today you'll find that open-plan offices, group brainstorming sessions, and PowerPoint presentations are everywhere – These being the 'ideal environment' for extroverts to thrive an environment which most employers think their employees do their best work. But introverts do their best work when alone, just look at Steve Wozniak who built the first personal computer at home, or Isaac Newton who formulated the law of gravity alone.

If you're a CEO you need to have a mix of introverts and extroverts to have your company flourish, but you need to take care of both sides needs and preferences. Consider if you need a quick decision or a careful decision to be made – An extrovert is perfect when you need to accomplish a simple task fast or come to a fast decision because the extrovert will manage the team to ensure everyone is pulling together working on the same task. However, the extrovert won't listen to a different/better way of achieving the goal as they make fast decisions based on little information, this is where introverts thrive. An introvert will take other peoples thoughts and ideas into careful consideration before making a final decision that is less likely to have flaws and fail.

When introverts and extroverts interact conflict can arise due to misunderstandings. A misunderstood extrovert will grow hostile and become offensive, overpowering the introvert who will retreat from such hostility. This is why both types need to be open and honest with each other, discuss differences of opinion and explain themselves – The introvert isn't disinterested as the extrovert presumes, they just aren't prepared to put themselves into the hostile environment in order to 'win the fight'.

In order to succeed in certain moments of business and indeed life, every introvert must learn to flip the switch and become a temporary extrovert whether for an hour or a day. Extroverts can inspire people, they get their voice heard, and accomplish whatever it is they are going after quickly and easily.

To do this, introverts just need to learn and display some typically extrovert actions – Speak clearly, walk confidently (take up space with your body – don't cross your arms and make yourself small!) put on a nonchalant air and keep your posture relaxed at all times. After you've completed what you set out to do you can put the switch back and rush to your quiet place to replenish your need for tranquility!

Chapter One - The Rise of the "Might Likeable Fellow": How Extroversion Became the Cultural Ideal
Chapter Two - The Myth of Charismatic Leadership: The Culture of Personality, a Hundred Years Later
Chapter Three - When Collaboration Kills Creativity: The Rise of the New Groupthink and the Power of Working Alone
Chapter Four - Is Temperament Destine?: Nature, Nurture, and the Orchid Hypothesis
Chapter Five - Beyond Temperament: The Role of Free Will (and the Secret of Public Speaking for Introverts)
Chapter Six - "Franklin Was A Politician, but Eleanor Spoke Out of Conscience": Why Cool Is Overrated
Chapter Seven - Why Did Wall Street Crash and Warren Buffet Prosper?: How Introverts and Extroverts Think (and Process Dopamine) Differently
Chapter Eight - Soft Power: Asian-Americans and the Extrovert Ideal
Chapter Nine - When Should You Act More Extroverted Than You Really Are?
Chapter Ten - The Communication Gap: How to Talk to Members of the Opposite Type
Chapter Eleven - On Cobblers and Generals: How to Cultivate Quiet Kids in a World That Can't Hear Them

“Introverts, in contrast, may have strong social skills and enjoy parties and business meetings, but after a while wish they were home in their pajamas. They prefer to devote their social energies to close friends, colleagues, and family. They listen more than they talk, think before they speak, and often feel as if they express themselves better in writing than in conversation. They tend to dislike conflict. Many have a horror of small talk, but enjoy deep discussions.”

“The highly sensitive [introverted] tend to be philosophical or spiritual in their orientation, rather than materialistic or hedonistic. They dislike small talk. They often describe themselves as creative or intuitive. They dream vividly, and can often recall their dreams the next day. They love music, nature, art, physical beauty. They feel exceptionally strong emotions--sometimes acute bouts of joy, but also sorrow, melancholy, and fear. Highly sensitive people also process information about their environments--both physical and emotional--unusually deeply. They tend to notice subtleties that others miss--another person's shift in mood, say, or a lightbulb burning a touch too brightly.”

“Don't think of introversion as something that needs to be cured.”

“The secret to life is to put yourself in the right lighting. For some, it's a Broadway spotlight; for others, a lamplit desk. Use your natural powers -- of persistence, concentration, and insight -- to do work you love and work that matters. Solve problems. make art, think deeply.”

“Or at school, you might have been prodded to come “out of your shell”—that noxious expression which fails to appreciate that some animals naturally carry shelter everywhere they go, and that some humans are just the same.”

“So stay true to your own nature. If you like to do things in a slow and steady way, don't let others make you feel as if you have to race. If you enjoy depth, don't force yourself to seek breadth. If you prefer single-tasking to multi-tasking, stick to your guns. Being relatively unmoved by rewards gives you the incalculable power to go your own way.”

“Introversion- along with its cousins sensitivity, seriousness, and shyness- is now a second-class personality trait, somewhere between a disappointment and a pathology. Introverts living in the Extrovert Ideal are like women in a man's world, discounted because of a trait that goes to the core of who they are. Extroversion is an enormously appealing personality style, but we've turned it into an oppressive standard to which most of us feel we must conform.”

“Everyone shines, given the right lighting.”

“We have two ears and one mouth and we should use them proportionally.”

“I worry that there are people who are put in positions of authority because they're good talkers, but they don't have good ideas. It's so easy to confuse schmoozing ability with talent. Someone seems like a good presenter, easy to get along with, and those traits are rewarded. Well, why is that? They're valuable traits, but we put too much of a premium on presenting and not enough on substance and critical thinking.”

― Susan Cain - Quiet: The Power of Introverts in a World That Can't Stop Talking