ReWork is an essential book for anyone starting a business, or who simply feels overwhelmed at work. Part cultural commentary, part advice column, “ReWork” is a cultural phenomenon itself, as a pioneer in both the normalization of remote work and saying no to toxic hustle culture. To get more done in less time at work, “ReWork” delivers candid advice with heart and bravado, shaming workaholics into re-thinking their workflows and attitudes about professional achievement.

My key Takeaways from “ReWork" by Jason Fried 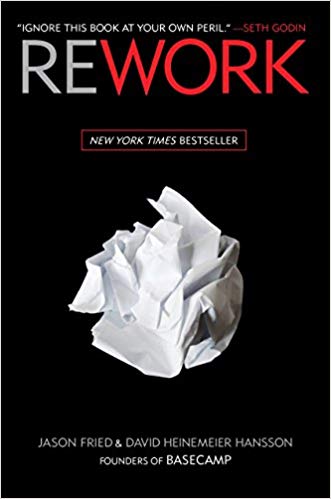 Takeaway #1 Build A Strong Core and You're Ready To Launch

Nowadays you often need just an idea and a laptop in order to launch your company but people get bogged down in details, want everything to be 100% perfect before launching, and think bigger than they actually need to. Starting small means you need fewer resources, less money, and less time allowing you to test the waters of your business venture slowly, building it up in your spare time, rather than going all-in, quitting your job, and potentially losing everything. So stop hesitating, the only thing a business needs to succeed is a strong core, everything else can be worked out on the journey to success.

Build your business on passion, something you stand for and care about rather than just money and you'll have a unique business idea which harnesses you a loyal following. When success comes others will try to copy your business model but if you've built your business on your own values and injected your own personality making sure customers get an experience or customer service that goes above and beyond anything they've experienced before, competitors might be able to replicate your product or service but they won't be replicate the wow factor you offer that has customers coming back again and again.

Decide if you really want mass recognition or if you want to be one of the elite that delivers the very best in the world. Don't be embarrassed of the size of your business, don't hide behind jargon or invent personalities to make your business sound more important and larger than it is – Be true and be honest, people love supporting small businesses and will love getting customer support from the owner of the business rather than a worker going through the rote! By keeping your business small you also have the opportunity to experiment with products and services without it being broadcast across the world when something goes wrong, plus you can keep your business true to its core – If that means keeping things simple rather than wowing customers with bells and whistles, so be it.

Businesses are advised to make forecasts and business plans years into the future but those who wing it often succeed much faster. The advantage small businesses have over corporations is being able to act fast, without getting tied down in bureaucracy and boardroom meetings, however, many people get stuck wanting to make things perfect and not taking action until they have that perceived perfection. Make decisions based on what comes up tomorrow or next week rather than planning for next year, don't let distractions drag you down, and never wait to have the i's dotted and the t's crossed before saying yes to the idea or opportunity as you'll miss out on something that could have been the making of you and your company.

“What you do is what matters, not what you think or say or plan.”

“When you don’t know what you believe, everything becomes an argument. Everything is debatable. But when you stand for something, decisions are obvious.”

“Workaholics aren't heroes. They don't save the day, they just use it up. The real hero is home because she figured out a faster way”

“Plus, if you’re a copycat, you can never keep up. You’re always in a passive position. You never lead; you always follow. You give birth to something that’s already behind the times—just a knockoff, an inferior version of the original. That’s no way to live.”

“Working without a plan may seem scary. But blindly following a plan that has no relationship with reality is even scarier.”

“If circumstances change, your decisions can change. Decisions are temporary.”

“Find a judo solution, one that delivers maximum efficiency with minimum effort. When good enough gets the job done, go for it.”

“If you are trying to decide among a few people to fill a position hire the best writer. it doesn't matter if the person is marketer, salesperson, designer, programmer, or whatever, their writing skills will pay off. That's because being a good writer is about more than writing clear writing. Clear writing is a sign of clear thinking. great writers know how to communicate. they make things easy to understand. they can put themselves in someone else's shoes. they know what to omit. And those are qualities you want in any candidate. Writing is making a comeback all over our society... Writing is today's currency for good ideas.”

“Workaholics don't actually accomplish more than nonworkaholics. They may claim to be perfectionists, but that just mean they're wasting time fixating on inconsequential details instead of moving on to the next task.”

“Until you actually start making something, your brilliant idea is just that, an idea.”

“That world may be real for them, but it doesn't mean you have to live in it.”

“Unless you are a fortune-teller, long-term business planning is a fantasy”