Robert greene walks readers through the process of achieving mastery, teaching them how to tap into their potential so they too, can become masters. This book combines practical knowledge and wisdom, reveals the secrets of greatness from geniuses over history. “Mastery” is filled with interviews from nine leaders in their fields, analyzing their lives, and the lives of accomplished people before them in the arts, inventors, scientists, activists, entrepreneurs to tease out the secrets of their success.

My key Takeaways from “Mastery" by Robert Greene 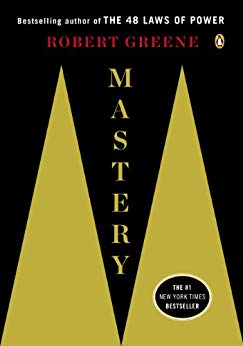 Takeaway #1 What Is Mastery?

Mastery is when your mind and/or body responds automatically, usually witnessed during an emergency situation. Mastering mastery is to get your mind and body acting as one every day so that you can dismiss focusing on the details to see the big picture; you don't need to know the how, you just do it... Whatever that 'it' is for you. Animals act in this way all of the time, they don't stop and ponder or second guess themselves out of something! It's thought that our ancestors didn't either, it's only since us humans developed critical thought that mind and body have become separated. When mind and body become one again you will be able to reach a new level of understanding and skill which will unlock your own inner genius allowing you to accomplish many great things in your chosen field.

Unfortunately, due to social pressures, many people suppress their desires and uniqueness in order to blend in with the crowd. They don't follow their inner calling whether that's a desire to paint, write a novel, teach, or cure diseases. Know that the little voice inside of you is always right, get brave and follow it!

When people seek out a new job they're usually chasing more money and/or a better position or title. Rarely do they take a new job because of the opportunity to learn and spend time working at their inner calling but this is where mastery can be found. Practical knowledge is invaluable and will guide you to better money and a prestige title later on. Know that it's ok to reject opportunities that others will call you crazy for missing out on to go back to the basics. Just look at Charles Darwin for inspiration, he turned down a place at medical school and a well paid job in the church to go study exotic plants and animals as an unpaid naturalist onboard the HMS Beagle which is where the theory of evolution began!

Having a mentor can work wonders in helping you learn something new, they will be able to save you time and money ensuring you stay on track and don't make the same mistakes they did. But for the relationship to work well, the mentor must be someone whom you truly admire and someone who is willing to take you under their wing, happy to share all of their knowledge with someone eager to learn.

There will come a day when you outmatch your mentor, this is when you start moving forward on your own with a wide open mind that's free of fear. You'll need to imagine you're a child again, one who can easily believe in mythical creatures and who questions everything that adults take for granted so that you can think in new ways, be open to solving problems, and challenging the rules already in place.

Thankfully it is possible to train the brain to think outside the box, you just have to broaden your mind at every opportunity, leaving the narrowmindedness behind. No longer can you be a creature of habit, doing things on repeat simply because you or others have always done it that way. Remember that trying too hard to solve a problem can have the opposite effect too, get your creative mind away from the problem by doing something else such as taking the dog for a walk and you might find you have a Eureka moment.

“Think of it this way: There are two kinds of failure. The first comes from never trying out your ideas because you are afraid, or because you are waiting for the perfect time. This kind of failure you can never learn from and such timidity will destroy you. The second kind comes from a bold and venturesome spirit. If you fail in this way, the hit that you take to your reputation is greatly outweighed by what you learn. Repeated failure will toughen your spirit and show you with absolute clarity how things must be done.”

“The future belongs to those who learn more skills and combine them in creative ways.”

“People around you, constantly under the pull of their emotions, change their ideas by the day or by the hour, depending on their mood. You must never assume that what people say or do in a particular moment is a statement of their permanent desires.”

“No one is really going to help you or give you direction. In fact, the odds are against you.”

“The time that leads to mastery is dependent on the intensity of our focus.”

“In the future, the great division will be between those who have trained themselves to handle these complexities and those who are overwhelmed by them -- those who can acquire skills and discipline their minds and those who are irrevocably distracted by all the media around them and can never focus enough to learn.”

“We are all in search of feeling more connected to reality—to other people, the times we live in, the natural world, our character, and our own uniqueness. Our culture increasingly tends to separate us from these realities in various ways. We indulge in drugs or alcohol, or engage in dangerous sports or risky behavior, just to wake ourselves up from the sleep of our daily existence and feel a heightened sense of connection to reality. In the end, however, the most satisfying and powerful way to feel this connection is through creative activity. Engaged in the creative process we feel more alive than ever, because we are making something and not merely consuming, Masters of the small reality we create. In doing this work, we are in fact creating ourselves.”

“The most effective attitude to adopt is one of supreme acceptance. The world is full of people with different characters and temperaments. We all have a dark side, a tendency to manipulate, and aggressive desires. The most dangerous types are those who repress their desires or deny the existence of them, often acting them out in the most underhanded ways. Some people have dark qualities that are especially pronounced. You cannot change such people at their core, but must merely avoid becoming their victim. You are an observer of the human comedy, and by being as tolerant as possible, you gain a much greater ability to understand people and to influence their behavior when necessary”

“The problem with all students, he said, is that they inevitably stop somewhere. They hear an idea and they hold on to it until it becomes dead; they want to flatter themselves that they know the truth. But true Zen never stops, never congeals into such truths. That is why everyone must constantly be pushed to the abyss, starting over and feeling their utter worthlessness as a student. Without suffering and doubts, the mind will come to rest on clichés and stay there, until the spirit dies as well. Not even enlightenment is enough. You must continually start over and challenge yourself.”

“It is in fact the height of selfishness to merely consume what others create and to retreat into a shell of limited goals and immediate pleasures.”