World Renown Stanford Psychologist tells the world about a powerful discovery she made as a researcher. She found that those who view their abilities as beng able to be developed were able to excel in multiple areas in life-academics, arts, athletics, music, but those wo viewed their abilities as fixed were not as accomplished. Any organization, individual, teacher, healer or leader can instill this mindset to motivate others or themselves to achieving outstanding success.

My key Takeaways from “Mindset: The New Psychology of Success" by Carol S. Dweck 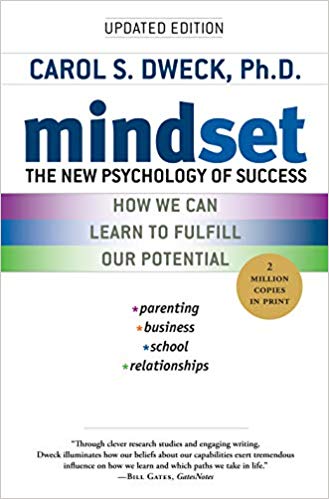 Our mindset plays a key role in how we see ourselves and usually determines whether we can achieve something or not.

People with a fixed mindset beleive they are naturally gifted at some things but incapable at doing others I.e. a musician or artist who is no good with numbers or a scientist who says he doesn't have an artistic bone in his body. People with this black or white mindset often let this stop their development, they're 'set in their ways' believing that old dogs cannot learn new tricks and seek approval from others whilst avoiding difficulties. They hope for everlasting love rather than working on their relationships as well as on themselves.

People with a growth mindset believe they can be and have anything they put their mind to so long as they work hard enough for it. They continue to acquire new skills throughout their life and see problems as challenges to overcome not to stop them in their tracks. They actively engage in their relationships to improve them, knowing that life is constantly changing, encouraging their partner to work on themselves whilst they also work on their own self-development.

Takeaway #2 Our Mindset Is Influenced In Childhood

Our mindset begins at birth but is shaped by those around us – Just think, what mindset did your parents have and other influential people in your life such as teachers?

Babies and toddlers have a growth mindset, they want to learn and grow every day. But whether this growth mindset continues or becomes a fixed mindset is usually down to the parents.

Parent's with a growth mindset encourage their children to learn, both with education and allowing them to try things and make mistakes but parents with a fixed mindset tell their child what is good or bad and right and wrong and are always judging them.

The brain can be trained just like any other muscle in the body, if you want a growth mindset, you can have one – You just need to teach yourself how and believe in yourself! It's not easy to leave a fixed mindset behind since this has likely become your emotional crutch, protecting you from failure, comforting you, and boosting your self confidence but you don't need to give it up altogether. Just replace parts of the fixed mindset with the growth mindset and you'll make leaps and bounds towards a life of fulfilment.