Former International FBI hostage negotiator Chris Voss lets readers into his head so they can learn how to successfully negotiate in any area of their lives. In this guide he shares the nine essential strategies and he used to successfully negotiate with terrorists, bank robbers and other criminals who had taken a hostage. Ordinary people will learn how to best negotiate in their own lives, for their salary, with their spouse or at work.

My key Takeaways from Never Split the Difference by Chris Voss 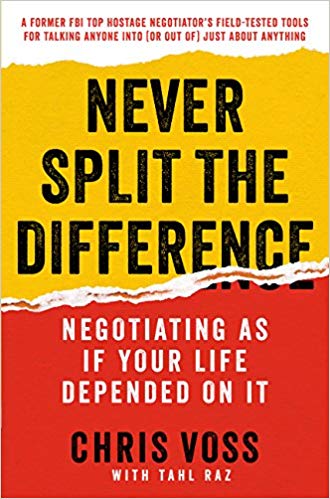 Negotiating successfully, no matter who it's with or in which area of your life, requires you to stay rational and use your intellect, you must build up a rapport so that trust is established and gather as much useful information as possible. You do this by actively listening to what the other person is saying and using the mirroring technique (when you repeat what the other person has said but in an inquisitive tone) to draw more information from them I.e “Your accounts manager quit??” This encourages the other person to elaborate more.

Takeaway #2: Watch your tone of voice throughout these negotiations.

Most times you'll need to use a playful/positive tone, smiling as you speak, but if the other person is nervous or could become upset, use a deep but soft voice, talking slowly to reassure them.

Takeaway #3: Putting Emotions To Use

Always let the other person make the first offer. If you're in a hurry to settle something you'll come off with the worst end of the bargain. Don't feel rushed as few deadlines are real deadlines set in stone. Take your time to understand what the other person is truly pushing for, not what they say they want as the two are often different and if you rush you could easily give the person something they don't really need or want but just threw in for the sake of it

My Favorite Quotes from Never Split the Difference

"Conflict brings out truth, creativity, and resolution.. He who has learned to disagree without being disagreeable has discovered the most valuable secret of negotiation."

"The beauty of empathy is that it doesn’t demand that you agree with the other person’s ideas.. If you approach a negotiation thinking the other guy thinks like you, you are wrong. That's not empathy, that's a projection."

"Negotiate in their world. Persuasion is not about how bright or smooth or forceful you are. It’s about the other party convincing themselves that the solution you want is their own idea. So don’t beat them with logic or brute force. Ask them questions that open paths to your goals. It’s not about you."

"Negotiation is not an act of battle; it’s a process of discovery. The goal is to uncover as much information as possible."

"It’s a phenomenon (and now technique) that follows a very basic but profound biological principle: We fear what’s different and are drawn to what’s similar. As the saying goes, birds of a feather flock together. Mirroring, then, when practiced consciously, is the art of insinuating similarity."

"Mirrors work magic. Repeat the last three words (or the critical one to three words) of what someone has just said. We fear what’s different and are drawn to what’s similar. Mirroring is the art of insinuating similarity, which facilitates bonding. Use mirrors to encourage the other side to empathize and bond with you, keep people talking, buy your side time to regroup, and encourage your counterparts to reveal their strategy."

"Another simple rule is, when you are verbally assaulted, do not counterattack. Instead, disarm your counterpart by asking a calibrated question."

"Psychotherapy research shows that when individuals feel listened to, they tend to listen to themselves more carefully and to openly evaluate and clarify their own thoughts and feelings... Contrary to popular opinion, listening is not a passive activity. It is the most active thing you can do."

"Research shows that the best way to deal with negativity is to observe it, without reaction and without judgment. Then consciously label each negative feeling and replace it with positive, compassionate, and solution-based thoughts."

"The positive/playful voice: Should be your default voice. It’s the voice of an easygoing, good-natured person. Your attitude is light and encouraging. The key here is to relax and smile while you’re talking."

"Though the intensity may differ from person to person, you can be sure that everyone you meet is driven by two primal urges: the need to feel safe and secure, and the need to feel in control. If you satisfy those drives, you’re in the door."

"The fastest and most efficient means of establishing a quick working relationship is to acknowledge the negative and diffuse it."

― Chris Voss, Never Split the Difference: Negotiating as if Your Life Depended on It

How Fully Do You Live?
Click below to find out where you are in each area of your life
CHECK HERE
Proudly Supporting